Norman's computer has a fast processor and 32 GB of RAM. For statistical purposes, he often needs to use million-line worksheets. He's still using Excel 2007, and it doesn't work well after it's run awhile with these huge workbooks. (In fact, it frequently crashes.) Other times, after startup, it works OK. Norman wonders what he can do to get more reliable operation when working with such large datasets. He wonders if Excel 365 work better, or perhaps more RAM.

Let's address the hardware issue first. Your system is probably sufficient for working with large data sets in Excel. However, if you are planning on updating your hardware, it is always a good idea to get more RAM. This allows Excel (and other programs) to do more data manipulation in memory rather than needing to swap the data between memory and the disk cache on the hard drive. Bottom line: Don't upgrade your system just for this one reason, but if you are upgrading for other reasons, then get a system with lots of RAM.

Now, on to Excel. The version of Excel you are using (Excel 2007) has a maximum memory allocation of 2 GB per instance, and do not appear to fully release all memory used be a workbook that was previously opened. This could be the cause of your "works at first, but not later" problem, and the only way to work around it is to periodically close and restart Excel.

In addition, Excel 2007 is only available in a 32-bit version. If you update to a later version of Excel, you'll be able to install a 64-bit version of the program. This is important because it allows you to address more memory, which means easier manipulation of larger data sets.

Once you upgrade your version of Excel, you'll want to follow these steps to make sure that Excel is utilizing the power of your CPU as well as it can: 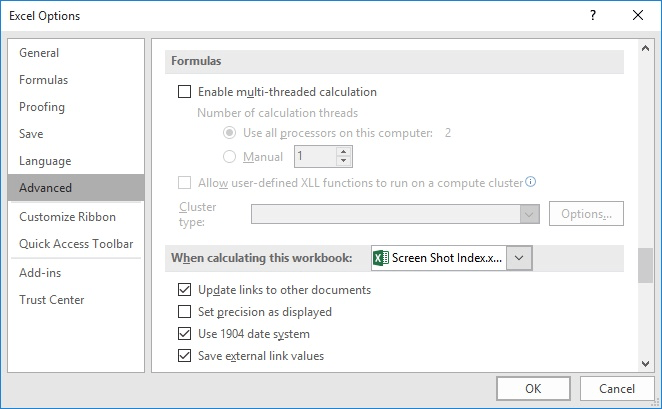 After taking these steps you may still run into problems with your data if the worksheets contain a lot of formulas. It makes sense that the more formulas you have—especially if those formulas involve volatile functions that must be recalculated constantly—the higher "load" you place on Excel. Anything you can do to reduce the number of formulas (and volatile functions), the more responsive you'll find Excel to be.

Now let's look at the advisability of using Excel itself. The underlying question is whether you really need to have such large worksheets in Excel in the first place. Depending on the nature of the data with which you are working, you may find it better to load your data into a database (such as Access, which is provided with many versions of Microsoft Office) and then use the database program to do your data summaries. You could, at that point, copy a much smaller subset of records into Excel to do your final analysis or formatting for presentation purposes.

Another approach once the data is in the database is to use the capabilities of Excel to access the data. For example, since you (hopefully) updated to a later version of Excel, you could use Power Query (called Get & Transform in Excel 2016) or Power Pivot to establish a connection to the database to process the data, which decreases the overall processing load on Excel.

Copy a formula from one place to another and Excel helpfully adjusts the cell references within the formula. That is, it ...

Logical structures are important in programming, as they allow you to control how the programming statements are ...

It can be frustrating if you expect to use some of Excel's tools normally available on the ribbon, but those tools are ...

Excel has a wide variety of keyboard shortcuts that can help make it easier to use the program. When one of those ...

Viewing More than Two Places in a Worksheet

If your worksheet gets big enough, it is easy to spend a lot of time navigating back and forth between different areas. ...

2007 is no longer supported, but the question is still valid. Here are a couple of links about RAM support in newer versions of Excel.


@@ LLA - Large Address Aware capability change for Excel
https://support.microsoft.com/en-us/help/3160741/large-address-aware-capability-change-for-excel
32-bit versions of Microsoft Excel 2013 and Excel 2016 can take advantage of Large Address Aware (LAA) functionality after installation of the latest updates. (see the "Resolution" section) This change lets 32-bit installations of Excel 2016 consume double the memory when users work on a 64-bit Windows OS. The system provides this capability by increasing the user mode virtual memory from 2 gigabytes (GB) to 4 GB. This change provides 50 percent more memory (for example, from 2 GB to 3 GB) when users work on a 32-bit system.


The suggestion has already been made, so I'll second it. For large datasets like that, PowerQuery and PowerPivot are the way to go.
PowerPivot and Power View Add-Ins for Excel 2013
https://www.dummies.com/software/microsoft-office/excel/the-powerpivot-and-power-view-add-ins-for-excel-2013/
In Excel 2013, the PowerPivot add-in, introduced in Excel 2010, that enables you to efficiently work with and analyze large datasets (such as those with hundreds of thousands or even millions of records) has been made a much more integral part the program. You can easily manage massive amounts of data from many related data tables is now part and parcel of Excel 2013 in the form of its Data Model feature.
Instead of having to download the add-in from the Microsoft Office website, you can start using PowerPivot simply by activating the add-in

Use Power Query to Create Dynamic Lookup Tables from a large Data Table
https://powerpivotpro.com/2014/02/two-quick-updates-university-re-launches-monday-and-power-query-is-amazing-amazing/
The data I have is one big fat CSV exported from the LMS software. Web “data sources” are just like that. They say, “here you go, here’s your big wide CSV file. Now we can wash our hands of the whole analysis and reporting business and dump it on you.”
Making Lookup tables manually… sucks. Who wants to go through that process over and over and over? Not me.
Power Query to the rescue!

Perspectives in PowerPivot (“views”)
https://support.office.com/en-us/article/perspectives-in-power-pivot-43b4e178-3d89-486c-8acd-ebc63802fead
One of the advantages of using the Power Pivot add-in to refine a Data Model is the ability to add perspectives. Perspectives provide custom views that you define for a particular user group or business scenario, making it easier to navigate large data sets. You can include any combination of tables, columns, and measures (including KPIs) in a perspective, and you can create multiple perspectives for various reporting constituencies in your organization. Perspectives can be used as a data source for other PivotTables and reports, including Power View reports. When you connect to a workbook that includes perspectives, you can choose a particular perspective on the Select Tables and Views page of the Data Connection Wizard.

Cond- Toggle Excel Conditional Formatting On and Off
http://www.myonlinetraininghub.com/toggle-excel-conditional-formatting-on-and-off
One of the nice features of Excel Tables is the banded row formatting, which makes it easier to read and scan your data. Unfortunately Excel Tables aren’t efficient with large data sets (over 100k rows), but we can replicate the banded rows with Conditional Formatting, and we can toggle it on and off at the click of a button like this (graphic on web page is active).

My 2012 Macbook Pro bogs down to uselessness at about 100,000 rows, but that's because I must often use lookup formulas.
The one feature that has helped at all is to turn off automatic processing as I work with the table and then select a block of those lookup formulas for updating rather than do the whole column.
I use index(... match( for the lookups. Where I have had lookups in more than one column, I use use match() alone to get a row number and then index() in both the data columns I want. It saves ... a little ... time.
Eventually there is no option but to update the entire page, but I don't have to do it often.

Two things I've noticed when manipulating large datasets in Excel 2010:
1. Using Find/Replace and Copy/Paste can take a long time if I'm not careful to sort the column where the operation is taking place first.
2. The screen freezes. The fix to this is to Unfreeze the worksheet (View Ribbon / Freeze Panes) and then to Freeze Panes again.

Good article and good tips from Graham too.

Updating to Office 365 would give Norman access to the latest version of Excel, I download the 64bit version although the 32bit is the default. I know PowerPivot is not available in all versions of Excel but Norman really needs PowerPivot if he is going to continue using Excel for these monster datasets so the extra spend is worthwhile.

Here is a Microsoft Office blog that discusses PowerPivot and PowerQuery.

And of course PowerPivot and PowerQuery (and a couple other Power Tools) underpin PowerBI.

All of the suggestions above are good. However a short-term answer to ease the situation may be to stop automatic calculations during data entry, filtering, running macros, etc.
The simple macros below would help to turn calculations on and off :-

Also any macros that are used could have the Application.Calculation lines inserted at the start and end.