Typing a Schwa Character in Excel

In Word, Doctor notes he can type a schwa character by holding down the Alt key as he types 399 on the numeric keypad. He can even copy this character from Word and paste it into an Excel worksheet. However, typing Alt+399 within Excel does not produce the same character. Doctor wonders why this is and how he can type the character he wants in Excel.

The Alt+[num] shortcut for adding characters in Word doesn't work the same way in Excel, as Doctor has discovered. Both programs work the same if the numeric code being used is in the range of 1 through 255, but beyond that all bets are off. This can lead to some confusing (and inconsistent) results. Let's take a look.

As Doctor notes, he can get a schwa in Word by typing Alt+399 on the numeric keypad. 399 is the decimal equivalent of 018F, so he could also get it by typing 018F and immediately pressing Alt+X. In Excel, it is helpful to display the Symbol dialog box. (Display the Insert tab of the ribbon and then click the Symbol tool, in the Symbols group.) If you scroll down a bit in the dialog box, you can find the schwa character. Actually, you may be able to find multiple schwa characters. We, however, want the one shown in the dialog box below. (See Figure 1.) 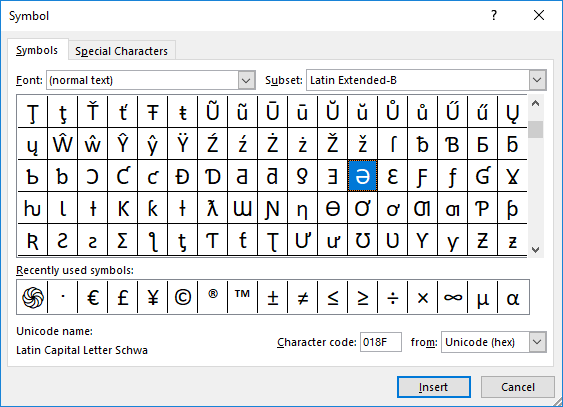 Note at the bottom of the dialog box it shows the code for the schwa: 018F. Unfortunately, you cannot use this code in Excel the same way you can in Word—the code is largely for informational purposes in Excel.

You could, though, use the decimal equivalent of this code along with the UNICHAR function, in this manner:

This results in the proper schwa character. (The UNICHAR function was introduced in Excel 2013.)

Let's go back to the Symbol dialog box for a moment. With the schwa character selected, you could, at this point, double-click on it, and it would be inserted into Excel. If you choose this route, then the schwa will show up in the "recently used symbols" area at the bottom of the dialog box, the next time you display it. 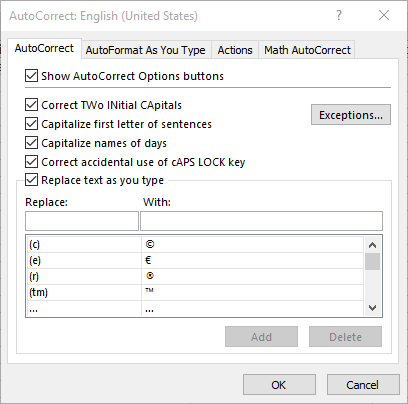 Now, whenever you type the characters you specified in step 7 and press space or tab, those characters are replaced with the schwa. The great thing about this approach is that the AutoCorrect entry is available from any Office application, not just from Excel.

The rules of professional editing often require that editorial changes in a quote be noted with brackets. These brackets, ...

Pulling Filenames into a Worksheet

You can use Excel for all types of data processing. You may want to work with filenames in a worksheet, but the first ...

Have you ever opened a workbook, only to have it not display your worksheet data? This can be very disconcerting, but it ...

Picking a Group of Cells

Automatically Adding 20% to an Entry

When you are developing a worksheet for others to use, you may want to have entries in a particular cell (or cells) be ...

Copying information from one program (such as Word) to another (such as Excel) is a common occurrence. If you want to ...

To see the Subset dropdown, select Unicode in the dropdown box below the Recently Used Symbols list.

To obtain the required schwa character using the hexadecimal value, use:

CMM: Many of the character sets in Excel 2010 do not include the schwa, so you cannot insert it via the symbol dialog box.

However, if the schwa is added to the auto-correct list, it will be inserted regardless of the character set in use.

CMM: I think you should still be able to scroll through the characters shown and find the first schwa. Just make sure that it has the same value in the character code field.

Actually, you may be able to enter 018F in the character code field, and it should move to the proper place in the table.

I love your tips. However, with regard to this tip ("Typing a Schwa Character in Excel") I do not have the Subset on the Insert Symbols screen. How do I work around this? See screen shot. (see Figure 1 below) 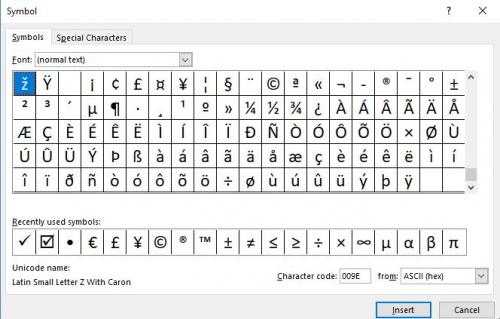