Please Note: This article is written for users of the following Microsoft Excel versions: 2007, 2010, and 2013. If you are using an earlier version (Excel 2003 or earlier), this tip may not work for you. For a version of this tip written specifically for earlier versions of Excel, click here: Relative References within Named Ranges.

Chris has set up a worksheet where he uses named ranges (rows) in his formulas. He has named the entire sales row as "Sales," and then uses the Sales name in various formulas. For instance, in any given column he can say =Sales, and the value of the Sales row, for that column, is returned by the formula. Chris was wondering how to use the same formula technique to refer to cells in different columns.

There are a couple of different ways this can be done. First of all, you can use the INDEX function to refer to the cells. The rigorous way to refer to the value of Sales in the same column is as follows:

This works if the Sales named range really does refer to the entire row in the worksheet. If it does not (for instance, Sales may refer to cells C10:K10), then the following formula refers to the value of Sales in the same column in which the formula occurs:

If you want to refer to a different column, then simply adjust the value that is added to the column designation in the INDEX function. For example, if you wanted to determine the difference between the sales for the current column and the sales in the previous column, then you would use the following:

The "shorthand" version for this formula would be as follows:

There are other functions you can use besides INDEX (such as OFFSET), but the technique is still the same—you must find a way to refer to an offset from the present column.

There is an easier way to get at the desired data, however. Let's say that your Sales range also has a heading row above it, similar to what is shown in the following: (See Figure 1.)

Figure 1. Example data for a worksheet.

The heading row lists the years for the range, and the values under the headings are those that actually make up the Sales range. To make sure this technique will work, follow these steps: 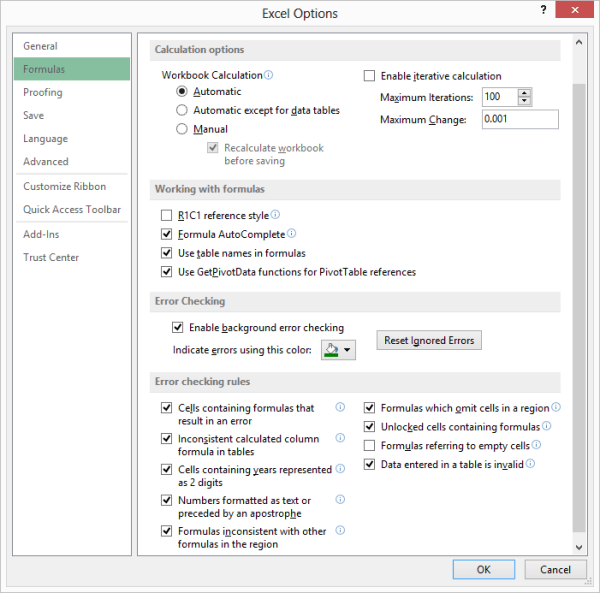 Figure 2. The Formulas options of the Excel Options dialog box.

With this configuration change done, you can use the following as your formula:

What you are actually doing is instructing Excel to work with unions of cells. In this instance, Sales '2013' returns the cell at the intersection of the Sales range and the '2013' column. A similar union is returned for the portion of the formula to the right of the minus sign. The result is the subtraction of the two values you wanted.

ExcelTips is your source for cost-effective Microsoft Excel training. This tip (9177) applies to Microsoft Excel 2007, 2010, and 2013. You can find a version of this tip for the older menu interface of Excel here: Relative References within Named Ranges.

Do you see a notification balloon pop up from your System Tray whenever you print a document? If this bothers you, then ...

How to refresh the Discussions screen to ensure all comments are visible.

If you expect your PivotCharts to update automatically when you update a PivotTables, you may want to alter, slightly, ...

If you need to generate a random sequence of characters, of a fixed length, then you'll appreciate the discussion in this ...

One of the staples of high school algebra classes is the quadratic equation. If you need to solve such equations in ...

If a series of cells contain the amount of money won by individuals, you may want to count the number of individuals who ...

I also am unable to get the last method to work, though I did discover that if I put =Sales in a cell below the Sales range, Excel is smart enough to return the value from Sales that corresponds to the column my cell is in. e.g. if Sales is A2-E2 and I put in D4 the formula =Sales, then it returns the value that is in D2.

IMHO, this "trick" doesn't work any more since Excel 2007. I tried to discover what replaced this syntax, but to no avail.
MS could surely explain that...
I think I just found what happened : This disappearance coincides with the appearance of "tables"!
And if you transform your named range into a table, then you can use the following syntax =Sales[2010]

IMHO, this "trick" doesn't work any more since Excel 2007. I tried to discover what replaced this syntax, but to no avail.
MS could surely explain that...

Thanks a lot for all your tips, Allen!
Could you please explain the last bit ("the easier way") a little closer? Like Dave and Chris I have difficulties to reproduce it.

I'm trying to get the "Easier Way" to work but having difficulty with the columns.

I have tried the 'union of cells' tip above but get 'The formula you typed contains an error' message when entering the formula. The Use Table Names in Formulas check box has been selected. Any ideas?

Hi Alan, thanks for your help, I am a regular enquirer of your site.
In your terminology describing "unions of cells" seems to be invoking set theory. My understanding of the related venn diagrams would indicate that in each case you are talking about an intersection, not a union. Proper use of "union" in a set context would have you referring to the cell at the intersection plus the entire column and entire row outwards from that intersection, not your intent. Cheers