Anne Marie has a range of cells containing formulas that utilize relative references. She wants to change the second reference in each formula from relative to absolute, so she wonders if there is a way to do this without the need to edit each cell's formula individually.

The answer to this question depends, entirely, on the characteristics of the formulas you are working with. If your data is arranged like most data that I've seen, you'll typically have a column that contains formulas based upon values in other columns and/or cells. You normally enter the formula at the top of the column and then copy that formula down the column for however many rows you need. (This could, of course, be turned 90 degrees so the formulas are across columns instead of down columns.)

If this describes the way your data is laid out, then all you need to do is edit the formula in the top cell of the column so it has the absolute reference that you want, and then press Enter. Select the cell again and then double-click the fill handle at the bottom-right of the cell. You end up with the modified formula copied down the column. The bottom line is that you only really needed to edit a single formula, not all the formulas individually.

If your data is laid out a bit differently (not in a column in the manner described), then you can try using Find and Replace to do the editing for you. First, however, you need to figure out if there is a consistent pattern in the second reference in the formulas you want to change. For instance, if you want to change all references to column D so that they are absolute, then you could proceed in this manner: 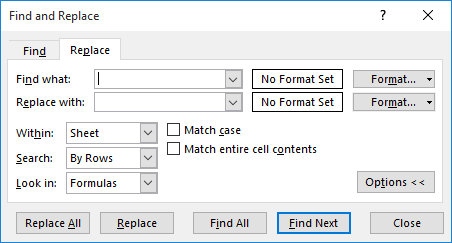 Figure 1. The Replace tab of the Find and Replace dialog box.

That should replace all the references to column D with $D, which indicates that the reference is absolute. You should know, though, that it will also replace any instances of a capital D in text values, plus if any of your formulas have $D in them already, you'll end up with $$D. (You can get around this last potential problem by doing a second Find and Replace in which you find $$D and replace it with $D.) This approach will also change all references to column D, regardless of whether they are in the second reference or not.

Is the second reference B7, B19, B7:B19, or do you skip that reference entirely because it is technically a parameter for a function and instead use C15? Such determinations are usually best left to a case-by-case examination, which means that you are back to looking at and possibly editing each cell individually, without the help of a macro.

ScreenTips are those small, yellow boxes that appear when you hover over different objects in Word. You have complete ...

For some operations and functions, Excel allows you to use wild card characters. One such character is an asterisk. What ...

Need to jump from one place in your document to another? One way to do this is through the user of the GotoButton field, ...

Paste information into a worksheet, and you may be surprised to see leading zeroes disappear before your eyes. Here's how ...

Getting Rid of Everything Except Numbers

Got some numbers and letters mixed up in the same cell? You may need to get rid of those letters so you are left with ...

The programs in the Microsoft Office suite are designed to work with each other easily. Sometimes there can be hiccups ...