Please Note: This article is written for users of the following Microsoft Excel versions: 2007, 2010, 2013, 2016, 2019, and Excel in Microsoft 365. If you are using an earlier version (Excel 2003 or earlier), this tip may not work for you. For a version of this tip written specifically for earlier versions of Excel, click here: Using Named Ranges in a Macro.

Using Named Ranges in a Macro

Bruce has a named range (Account) defined in a workbook and he wonders how to access and use that named range from within a macro. There are several ways you can access the range, using either the Range object or the Names collection.

To access the named range using the Range object, all you need to do is provide the name of the range as a parameter to the object. This name is the same one that you defined within Excel. For instance, the following line could be used to change the interior color of the entire range:

Note that the Range object is used relative to a particular worksheet, in this case Sheet1. You could also define a range object within VBA and then assign it to be equal to the named range, in this manner:

The other method of using the named range is to use the Names collection. The following line will again set the interior color of the range to yellow:

Note that the Names collection is relative to the entire workbook, so it is not necessary to know which worksheet the named range is associated with when you use this method of access. You can also define a range object in VBA and assign it to be the same as the named range:

You should know that the Names collection method of accessing a named range will only be viable if you don't have the same named range defined on different worksheets in the workbook. If you do, then you will need to use the Range object method, which requires the use of a specific worksheet name in the reference.

You may need to determine the numeric value of a character in a macro. You can do that using the Asc function, described ...

Keeping a Document Open After Hyperlinking

A solution to Hyperlinking closing your Word document in Word 97.

One of the financial worksheet functions provided in Excel is the XIRR function. This is used to figure out an internal ...

Paste Special is a great tool that allows you to modify the values in a range of cells in your worksheets. You may want, ...

Selecting Visible Cells in a Macro

Many times you need to select just the visible cells before taking some action. It is helpful to know how to make this ...

Writing a Macro from Scratch

I'm not certain where to put "Account". See image. (see Figure 1 below) 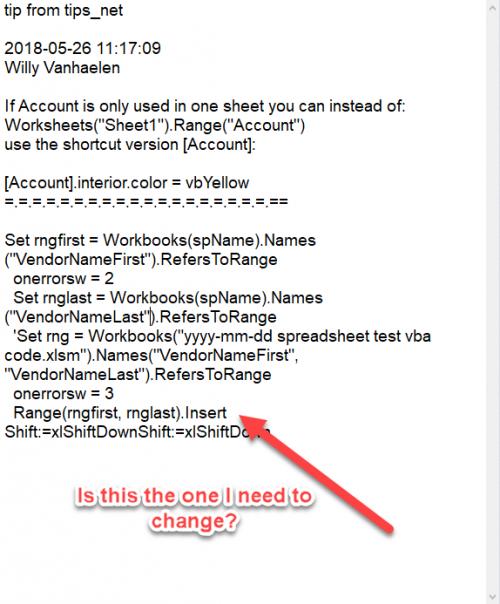 If Account is only used in one sheet you can instead of: Worksheets("Sheet1").Range("Account")
use the shortcut version [Account]: