Please Note: This article is written for users of the following Microsoft Excel versions: 2007, 2010, 2013, 2016, 2019, and Excel in Office 365. If you are using an earlier version (Excel 2003 or earlier), this tip may not work for you. For a version of this tip written specifically for earlier versions of Excel, click here: Choosing Direction after Enter On a Workbook Basis.

Choosing Direction after Enter On a Workbook Basis

When you press Enter after typing information into a cell, Excel normally saves your information and then moves to the next cell beneath the one where you pressed Enter. You can modify this behavior, however: 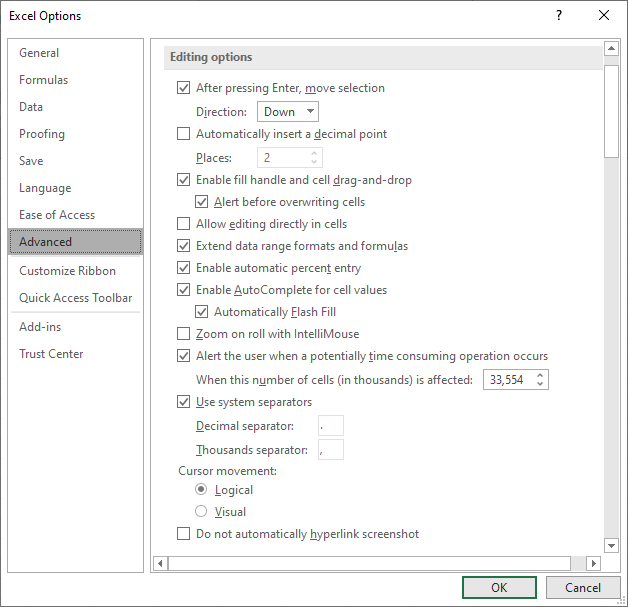 Figure 1. The Advanced options of the Excel Options dialog box.

If you have a need to vary the Enter key behavior on a workbook-by-workbook basis, you might think you are out of luck. You can, however, use a little creative macro code to specify which direction you want to go after Enter, and have that code run whenever a workbook is activated.

There are two separate subroutines here. The first one runs whenever the window for the workbook is activated. In this case, it stores the settings associated with the MoveAfterReturn and MoveAfterReturnDirection properties into variables. (You will learn about these variables shortly.) The macro then sets the MoveAfterReturn property to True and sets the direction to xlUp. If you want to go a different direction by default in this particular workbook, simply use a different Excel constant, such as xlDown, xlToLeft, or xlToRight.

The two variables used in these routines, lMoveDirection and bMove, need to be defined in the declaration portion of any module. This allows the variables to be accessed from both of the above routines.

ExcelTips is your source for cost-effective Microsoft Excel training. This tip (7220) applies to Microsoft Excel 2007, 2010, 2013, 2016, 2019, and Excel in Office 365. You can find a version of this tip for the older menu interface of Excel here: Choosing Direction after Enter On a Workbook Basis.

Saving Information in a Text File

The VBA programming language provided with Excel allows you to create and modify text files quite easily. Here's how to ...

Using a Formula to Replace Spaces with Dashes

If you need a formula to change spaces to some other character, the SUBSTITUTE function fits the bill. Here's how to use it.

One of the finishing touches used in some types of documents are an index or a special table, such as a table of ...

Excel can check the data and formulas in your worksheet to see if it detects any errors. The rules used for this checking ...

When you right-click a cell, does it seem that the Context menu is missing an item or two? Here's how to get those items ...

Turning Headers On and Off

Normally Excel displays row and column headers in a worksheet. If you prefer, you can turn these navigational aids off ...

Dan
Macros are entered into modules, the default names are Module1, Module2.....Module n. Open the visual basic editor (Alt + F11), in the View Tab click Project Explorer (Ctl + R) and you will see a list of all the modules. in the workbook. Click on it and you should find your macro(s.). I would copy your macro into Word or Notepad. Then, while in VB Editor click File, Remove Module X, exit VBE and save the workbook. You willl probabley have to close and restart the workbook.
Now I'd post on a forum say, answers.microsoft.com, choose the Excel forum and describe the problems and paste your code into the query.
If the steps I mentioned don't find the macro you may have entered it into a sheet module. Right-click on each sheet tab and click View Code until you find the offending macro.

I tried this and I'm new to VB but somehow now my enter key doesn't work in excel. I've tried to find the code i entered and delete it but can't find it. Any way to reverse what I've done with my bad coding skills?