Please Note: This article is written for users of the following Microsoft Excel versions: 2007, 2010, 2013, 2016, 2019, and Excel in Microsoft 365. If you are using an earlier version (Excel 2003 or earlier), this tip may not work for you. For a version of this tip written specifically for earlier versions of Excel, click here: Changing the Reference in a Named Range.

Changing the Reference in a Named Range

Using named ranges can be very handy when you are working with formulas or when you just want to keep track of what certain cells in a worksheet are used for. At some point, however, you may want to change the cells referred to by an existing named range. For instance, if a named range called MyRange refers to cells A1:A5, you may want to have it refer to cells C7:C19 instead.

The easiest way to change the range to which a name refers is to use the Name Manager. You can display the manager by displaying the Formula tab of the ribbon and clicking the Name Manager tool in the Defined Names group. (See Figure 1.) 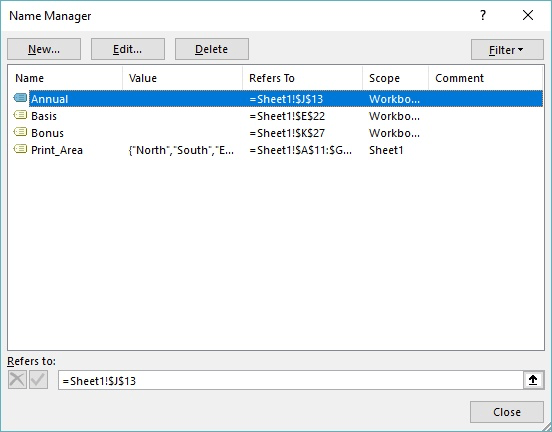 The Name Manager lists all the named ranges that you've defined. You might think that you need to click Edit in order to make a change, but when changing the actual range associated with a name the process is even easier:

ExcelTips is your source for cost-effective Microsoft Excel training. This tip (8237) applies to Microsoft Excel 2007, 2010, 2013, 2016, 2019, and Excel in Microsoft 365. You can find a version of this tip for the older menu interface of Excel here: Changing the Reference in a Named Range.

Aborting a Macro and Retaining Control

If you need to exit a macro before it is finished running, you can do it using a brute force method, or you can build in ...

Generating a Table of Authorities

With the entries for your table of authorities marked throughout your document, you are ready to actually generate the ...

Tools to Boost Motivation and Productivity

Sometimes a writer needs motivation to keep ploughing ahead in their craft. Word doesn't really include any tools to help ...

Got some formulas you slaved over and want to use in lots of workbooks? This tip presents some helpful ideas on how you ...

If you've got a list of names in a column, you may want to change the order of each name. For instance, the name have the ...

ISBN numbers are used to denote a unique identifier for a published book. If you remove the dashes included in an ISBN, ...