Please Note: This article is written for users of the following Microsoft Excel versions: 2007, 2010, 2013, 2016, 2019, and Excel in Microsoft 365. If you are using an earlier version (Excel 2003 or earlier), this tip may not work for you. For a version of this tip written specifically for earlier versions of Excel, click here: Deleting Everything Up to a Character Sequence.

Deleting Everything Up to a Character Sequence

One way to do this is to use a formula. For instance, the following formula will evaluate whatever is in cell A1 and simply return everything up to the =XX= characters. If the characters are not found in the cell, then the entire cell is returned:

If you want, instead, to not return the first occurrence of =XX=, all you need to do is change the +1 near the end of the formula to -3.

If you prefer a macro-based solution you could use a routine like the following. It examines all the cells that are currently selected and then deletes everything before the =XX= sequence.

You should be aware that this macro can cause some errors, particularly when what you are searching for begins with an equal sign (as in =XX=). When a string beginning with an equal sign is stuffed back into the cell, you'll get a #NAME? error because Excel tries to parse the cell as if it contains a formula.

If you want to delete everything up through the character sequence, use this line in the middle of the routine:

ExcelTips is your source for cost-effective Microsoft Excel training. This tip (8446) applies to Microsoft Excel 2007, 2010, 2013, 2016, 2019, and Excel in Microsoft 365. You can find a version of this tip for the older menu interface of Excel here: Deleting Everything Up to a Character Sequence.

Don't like the way a drawing object looks? Perhaps flipping the object could help appearances. Excel allows you to flip ...

You can create hyperlinks to all sorts of worksheets in a workbook, but you cannot create a hyperlink to a chart sheet. ...

Thin spaces are a typographic device that allows you add a bit of space between elements of a document. There are no thin ...

Don't like the way that Excel pastes when you press CTRL+V? Here are some ways that you can modify the normal paste mode ...

Copying Cells to Fill a Range

Excel provides two really helpful shortcuts you can use to fill a range of cells, either horizontally or vertically. ...

As you use Excel to collect data over time, sometimes winnowing out the latest data can present a challenge. Here are a ...

Use one or the other line, not both. The following shows possible results

The active cell shows an error because it mixes Text & numbers in A8. The lines used are show in row 6. 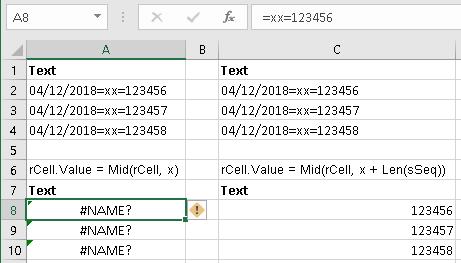 Thank you for this tip. There is one part that I don't quite understand. In the very last part of the tip you mention adding "rCell.Value = Mid(rCell, x + Len(sSeq))" in the middle of the routine. Do you mean that it replaces something that is already there, or just add this as an extra line? And where exactly do I add it- can you be a bit more specific?