Please Note: This article is written for users of the following Microsoft Excel versions: 2007, 2010, 2013, 2016, 2019, and Excel in Microsoft 365. If you are using an earlier version (Excel 2003 or earlier), this tip may not work for you. For a version of this tip written specifically for earlier versions of Excel, click here: Alphabetic Column Designation.

You can easily determine the numeric column of cell by using the COLUMN function. All you need to do is put a formula like this in a cell, and the result is a value where A=1, B=2, etc.:

What if you want an alphabetic value, rather than a numeric value? This can be done in any of several different ways. For instance, the following formula will work very nicely for the first 26 columns, A through Z:

Of course, this solution won't work if you want to know the letter designations of columns beyond Z. Since a column in Excel can have up to three digits (Excel can use columns up through XFD), a different approach to finding the column letters is in order:

An even shorter version of the formula relies upon the SUBSTITUTE function instead of the LEFT function:

Of course, you can also use a macro-based solution, if you want to. The following macro will work with one, two, or three character columns:

The macro is a user-defined function, which means that you can use it in your worksheets by simply adding this to any cell:

ExcelTips is your source for cost-effective Microsoft Excel training. This tip (9240) applies to Microsoft Excel 2007, 2010, 2013, 2016, 2019, and Excel in Microsoft 365. You can find a version of this tip for the older menu interface of Excel here: Alphabetic Column Designation.

If you want to put comments in your document, you can use Word's built-in comment feature. Another way is to use callout ...

Toolbars make it easy to quickly access your most common commands. Excel allows you to customize your toolbars so that ...

Copying information from one program (such as Word) to another (such as Excel) is a common occurrence. If you want to ...

Creating math formulas is a particular strong point of Excel. Not all the functions that you may need are built directly ...

Determining a Name for a Week Number

You could use Excel to collect data that is useful in your business. For instance, you might use it to collect ...

If your worksheet formulas seem to go on forever, here's a handy way to make them more understandable. (All you need to ...

Peter,
I must admit that in your previous version that line was indeed executed because you had a line "On Error Resume Next" (I didn't pay attention to it until now).
The code line: "ColRef = Range(ref & 1).Column", generates a vba error when >XFD, causing CoLRef to turn to zero. Then the macro resumes with the following line where you trapped the 0.

Your last macro though has still some weaknesses.
Row 8 in your picture is not correct.
The macro works only with upper case letters. With lower case it generates always an error.
The line "If ColRef = 0 Then ColRef = "<=XFD" 'CVErr(2023)" will never be executed because the error is now trapped by "ElseIf Application.IsText(ref) And Left(ref, 3) > MAXAddr Then".

In fact in my initial version (23th May) there is only one situation where the user could be confused and that's if the argument is > 16384. But I thought it is so obvious that it was not worth it to do something about that. And if that bothers you it can easily be fixed by replacing Cells(ref) by Cells(1,ref). The other wrong arguments (zero and > XFD) cause vba errors that excel displays as #VALUE!. So I stick to that version because it's simple.

BTW in your versions you mention: "Author: Willy Vanhaelen" but that is not entirely correct because the changes made are not mine.

Yes, that is why I put it in, if someone entered say 'XFE1' then the COLREF = 0. I still think that your original is better with that modification. 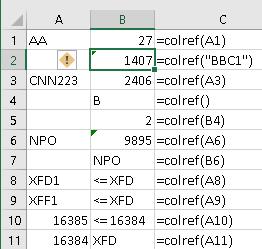 Here is the macro with indentation because it is easier to understand. BUT DON'T COPY IT (it contains non-breaking spaces):

Peter,
I though about that but didn't include it for clarity. But you are right, users with less experience could be misled.

Here is my version. Instead of using xlErrRef, I give the user a meaningfull message so he knows exactly what he did wrong:

Function ColRef(Optional ref As Variant) As Variant
'Author: Willy Vanhealen
'Date: 23 May 2019
Const MAXCOL As Integer = 16384
On Error Resume Next

Willy
I thought that you might improve the macros. Excellent a usual!

Here is a UDF that does it all:

@Peter Atherton
Here is an even slightly shorter version of your macro:

I use the Mid function so I don't need the Address parameters (False, False).
I replaced Cells(1, n) by Cells(n). The row argument is not required here because cells(n) points to the nth cell in the first row until 16384. 16385 will return A, the first column of row 2.

Error on the ColNumber UDF

Here is the way I did it, you enter a number for the column

Its corollary returns the column number

In the above macro, I don't see the necessety to declare the Temp variable and then use it only once. This macro is shorter and works the same:

Because InStr(ad1, "$") + 1 always returns 2, you can even reduce it to a one-liner that does the job equally well:

Thank you for the insightful tip, Allen!