Please Note: This article is written for users of the following Microsoft Excel versions: 2007, 2010, 2013, 2016, 2019, and Excel in Microsoft 365. If you are using an earlier version (Excel 2003 or earlier), this tip may not work for you. For a version of this tip written specifically for earlier versions of Excel, click here: Segregating Numbers According to Their Sign.

Are you working with a large set of data consisting of mixed values, some negative and some positive, that you want to separate into columns based on their sign? There are a few ways this can be approached. One method is simply to use a formula in the columns to the right of the mixed column. For instance, if the mixed column is in column A, then you could place the following formula in the cells of column B:

This results in column B only containing values that are greater than zero. In column C you could then use this formula:

This column would only contain values less than zero. The result is two new columns (B and C) that are the same length as the original column. Column B is essentially the same as column A, except that negative values are replaced by zero, while column C replaces positive values with zero.

If you want to end up with columns that only contain negative or positive values (no zeroes), then you can use the filtering capabilities of Excel. Assuming the mixed values are in column A, follow these steps: 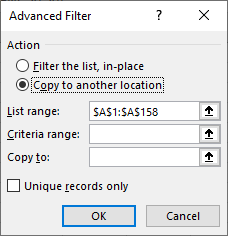 You now have the desired two columns of positive and negative values. You can also delete the cells at E1:E2 if you desire.

ExcelTips is your source for cost-effective Microsoft Excel training. This tip (9601) applies to Microsoft Excel 2007, 2010, 2013, 2016, 2019, and Excel in Microsoft 365. You can find a version of this tip for the older menu interface of Excel here: Segregating Numbers According to Their Sign.

Word documents can contain more than just words. They can also contain drawing objects such as lines and simple shapes. ...

Do you wish that the buttons on your Excel toolbars were easier to see and use? The answer could be to turn on the large ...

Want your comment boxes to appear someplace other than the right side of a cell? You may be out of luck, and here's why.

Sometimes it is helpful to look at data that is rotated 90 degrees. Excel allows you to use Paste Special to transpose ...

Excel allows you to easily combine text together. Interestingly, it provides two ways you can perform such combinations. ...

One of the areas in which Excel provides worksheet functions is in the arena of statistical analysis. You may want to ...