Please Note: This article is written for users of the following Microsoft Excel versions: 2007, 2010, 2013, 2016, 2019, and Excel in Microsoft 365. If you are using an earlier version (Excel 2003 or earlier), this tip may not work for you. For a version of this tip written specifically for earlier versions of Excel, click here: Stopping Fractions from Reducing.

Excel allows you to enter fractions into cells, provided you preface the entry with a zero and a space. Thus, if you wanted to enter a fraction such as 18/28, you would enter 0 18/28 into the cell. (If you just enter 18/28, then Excel assumes you are entering either a date or text.)

When you enter your fraction, Excel does two things during the parsing process. First, it formats the cell as a fraction, based on the number of digits in the denominator of the fraction. In the case of the fraction 18/28, there are two digits in the denominator, so the cell is automatically formatted as a fraction of up to two digits. (See the Number tab of the Format Cells dialog box.)

The second thing that happens is that Excel converts the number into its decimal equivalent. In other words, Excel stores the number internally as 0.642857142857143, which is what you get when you divide 18 by 28. At this point, the fraction no longer exists; the number is a decimal value.

After you enter any value into Excel, it automatically recalculates your worksheet. With the parsing done, and the new value entered, Excel recalculates and redisplays values. Remember—the value in the cell is now 0.642857142857143, and to redisplay the value, Excel sees that it is supposed to use a fraction of up to two digits. The smallest fraction it can do this with is 9/14. Thus, this is what Excel displays in the cell—9/14 instead of 18/28.

Because of the parsing process that Excel follows, there is no way that you can force Excel to remember your fractions exactly as you entered them. After all, Excel doesn't store fractions, it stores decimal values. You can, however, change the format used by Excel to display the value in a particular cell. For instance, if you wanted the cell into which you entered 18/28 to display the fraction with 28 as the denominator, then you could follow these steps: 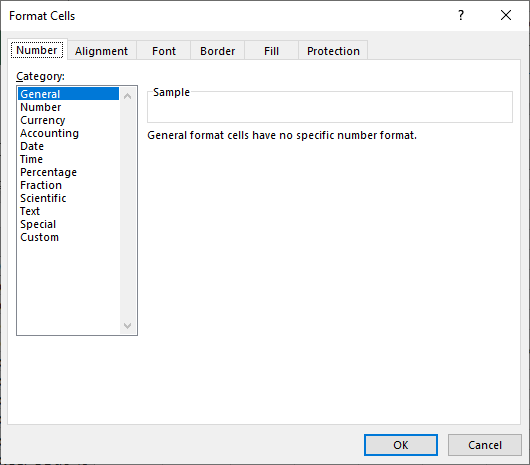 Figure 1. The Number tab of the Format Cells dialog box.

Again, remember that this only changes the display of the values in Excel, not the actual values themselves—they are still decimal values. The only way to have Excel remember exactly what you entered is to enter the fraction as text (format the cell as Text before making your entry), but there is a drawback to this. Once entered as text, you cannot use the fraction in any calculations.

ExcelTips is your source for cost-effective Microsoft Excel training. This tip (12043) applies to Microsoft Excel 2007, 2010, 2013, 2016, 2019, and Excel in Microsoft 365. You can find a version of this tip for the older menu interface of Excel here: Stopping Fractions from Reducing.

Bookmarks are a great feature you can use to mark the location of text or to mark a position within a document. They can ...

Columns can be an integral part of your document layout. In some instances you may want Word to insert a vertical line ...

When your screen doesn't behave as you expect, it could be because of the Scroll Lock on your system. Here's what to check.

If your workbooks are shared and used by a number of different people, you may end up with some formatting in those ...

When you are formatting your worksheet, Excel lets you easily merge adjacent cells together. If you want to wrap the text ...

Want to repeat cell contents over and over again within a single cell? Excel provides two ways you can duplicate the content.