Opening Two Workbooks at Once

Bill has two workbooks in which he does most of his work during the day. He wonders if there is a way to open these two workbooks at the same time, rather than needing to open them individually.

There are many, many ways you can do this. In this tip I'm just going to examine eight (!) different ways you can have them open at the same time. Some of these methods involve the use of Windows and others involve just Excel.

You know you can open an Excel workbook directly from Windows by simply double-clicking the workbook name. If you want to open multiple workbooks, follow these steps:

When Windows goes through its startup procedures, it does a lot of work. One of the things it does (among many others) is to open whatever files or run whatever programs are stored in a special Startup folder. To display this folder, open a File Explorer window and type the following:

When you press Enter, you should see a folder similar to the following. (See Figure 1.) 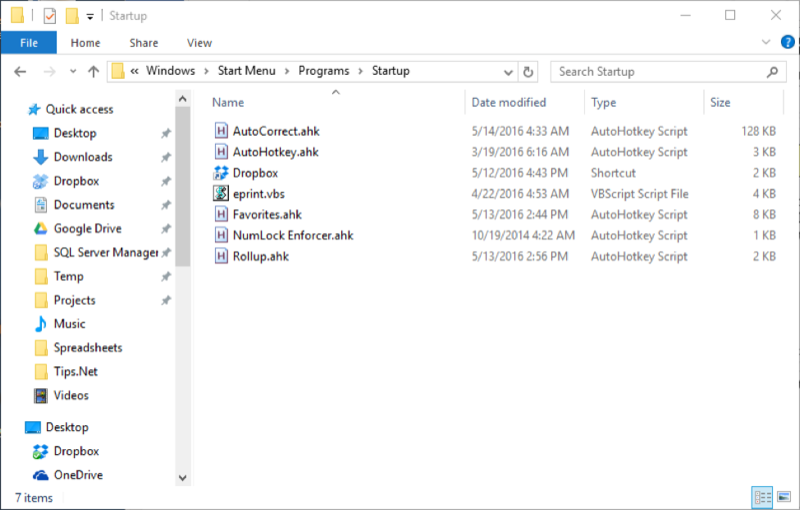 There may be many or only a few items in the folder. If you want, you can create shortcuts to your two workbooks and place those shortcuts in this special Startup folder. The next time Windows is started, the two workbooks will be automatically opened.

You should note that this approach works only when you start Windows after having previously completely shut down. If you simply put your PC to sleep, the Startup folder doesn't come into play when the PC awakens.

Batch files are the "old school" way of automating a series of commands, dating all the way back to the advent of DOS. They still work great, though, and you can create a batch file that will open two workbooks. All you need to do is use Notepad to create a text file that contains the following two lines:

Note the change of the filename extension from txt to bat; this is critical. Once renamed, you can double-click the batch file and it should run and open the workbooks.

We are all familiar with the Open dialog box; it is what is often used in Excel to, well, open files. Using the dialog box, you can open multiple workbooks at once, in a manner that is similar to how you open multiple files in Windows. Just follow these steps:

Excel has a special folder that is traditionally known as the XLSTART folder. Any workbooks placed in this folder are automatically opened whenever you start Excel. The trick can be to find the XLSTART folder, because it isn't always in the same location on every system.

The easiest way to find the folder is to use the search capabilities of Windows itself. (Do this while Excel is not running.) Once located, you have two options:

Either way, when you next start Excel, the two desired workbooks should open as you desire.

Configuring Excel to Open the Workbooks

This approach is easy to accomplish within Excel. Just create a new folder and move the two workbooks into that folder. Then, within Excel, follow these steps: 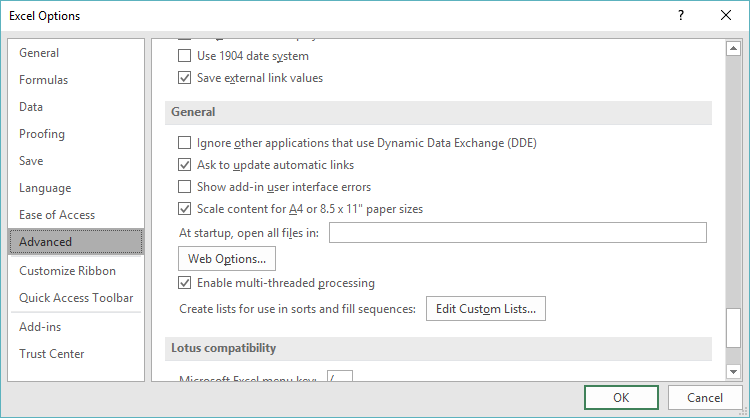 Figure 2. The General section of the Advanced Excel Options.

Now, the next time you start Excel, those two workbooks (and anything else in that folder) should open automatically. If the workbooks don't open, check to make sure that you put the correct path into the field in step 4.

There are actually two approaches you can use when it comes to macros. The first is to create a macro that explicitly opens both workbooks. It should look very similar to the following:

Just change the full pathnames to the workbooks you want to open, and then run the macro when you want them to open. You can even, if desired, configure Excel so the macro is available on the ribbon or assign it to a shortcut key.

The second approach is a variation on the forgoing macro—name it Workbook_Open and place it in the ThisWorkbook module of your Personal.xlsb workbook. Then, whenever you start Excel the two workbooks will automatically be opened.

If you are using either Excel 2007 or Excel 2010 you can create a workspace that uses your two workbooks. (Workspaces were removed from Excel with the release of Excel 2013.)

One of the most common ways to format information in a table is to apply some sort of alignment to the contents of table ...

There you are typing along, minding your own business, when wham! You end up in an entirely different language and you ...

Synchronous scrolling of different windows can be very helpful with some worksheets. Excel allows you to synchronize the ...

Saving a Workbook in a Macro

Does your macro need to make sure that the workbook being processed is saved to disk? You can add the saving capability ...

Have you ever been working with data in Excel and experienced a "freeze" where the program stops responding? This can be ...

Workbooks can get rather large rather quickly. If you think your workbook has gotten too big too fast, here are some ...