Please Note: This article is written for users of the following Microsoft Excel versions: 2007, 2010, 2013, 2016, 2019, and Excel in Microsoft 365. If you are using an earlier version (Excel 2003 or earlier), this tip may not work for you. For a version of this tip written specifically for earlier versions of Excel, click here: Importing Huge Data Files.

Damodar has a CSV file he needs to import into Excel. Normally this wouldn't be a problem, but this CSV file has well over a million rows in it. He wonders if there is any way to get such a huge file into Excel.

Excel has a limit on the number of rows you can have in a worksheet—up to 1,048,576. As Damodar has discovered, it is very possible to have a raw data file that has more than this number of rows. If you need to import that file into Excel, then doing so can appear almost impossible. There are a couple of things you can do, however.

If you don't want to break up your input files, you might consider importing the file into Access. Unlike Excel, Access has virtually no limit on the number of rows you can import. You could then either work with the file in Access, or export portions of the file to use in Excel.

You could also use a macro to import the records in the large source file. There are many ways you can do this, but the basic idea behind any approach is to fetch each row from the source file and place it in a new row of a worksheet. The macro must keep track of how many rows it's placed, and switch to a new worksheet, if necessary.

The macro assumes you have enough worksheets already in your workbook to contain the data, and that they are numbered Sheet1, Sheet2, Sheet3, etc. Two variables you'll want to check in the program are the settings of sDelim and MaxSize. The first specifies what character is used as a field delimiter in the information that is being read. The second specifies the maximum number of rows you want on each worksheet. You should also note that the macro opens the text file MyFile.txt. You'll want to change this Open statement so that it opens the real source file you want to import.

There are a couple of potential gotchas that you need to be aware of when running a macro like this. The first is that it is going to run rather slowly—as in "take a break for lunch" or "go home overnight" slowly. The length of time it takes is directly related to the number of rows of data and the number of fields in each row. The second thing to be aware of is it is entirely possible that you will crash your system. This, again, depends on the amount of data you are importing. That data requires memory, and the amount of memory required increases with each imported row. If you run out of memory, well... (you get the idea).

Finally, if you are using the version of Excel provided with Microsoft 365, you could work with your data using Power Query. This will only work, though, if you can �'transform�" your data in some way. This means that you could identify ways in which your data could be segregated to differing worksheets based on a value that can be identified in the data you need to import. Perhaps, for instance, you might be able to separate data based on department, region, sales person, or some other value. 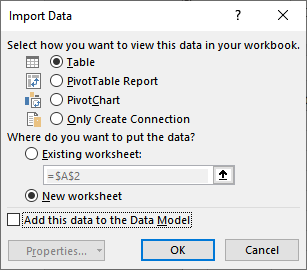 Working with Power Query is (as the name implies) powerful. It will take you a bit of getting used to, however, to make sure that you import everything you need from the source CSV file.

You can create a special header and footer page numbering scheme by using nested fields. This tip shows an example of how ...

Want to keep track of various rows in a data table through the use of record numbers? Here are some options and ...

When you create a document, Word is constantly checking behind the scenes to make sure that what you type makes sense. ...

Delimited files are often created through Excel so that your data can be exported to other programs. If the delimited ...

Opening a Workbook with Two Windows

If you open a workbook and notice that Excel displays two windows for it, this has to do with how the workbook was saved. ...

As you are developing your workbooks, you might want a way to automatically create backup files that include a date and ...

Loading large data to a "traditional" DB is an option Then use powerquery to connect to the DB to extract into the data model.
.
PowerQuery is not limited to 365. I've been using it in Excel 2010. The old version obviously won't have all of the features in the 365 version, but it works for the "fundamentals".
.
2016/2019/365 PowerQuery is "built in" on the ribbon
.
The Complete Guide to Installing Power Query (2013 2010)
https://www.excelcampus.com/install-power-query/
Power Query is a “free” add-in from Microsoft for Excel 2010 and 2013. This guide explains which versions of Excel you need, and how to install it.
.