If you are thinking that you could use a custom format to address the need, that won't work. With ever custom format we could come up with, Excel drops any trailing zeroes from what it displays. (Or, conversely, if the custom format includes "0" as a placeholder, it adds zeroes at the end of the entry.)

The easiest way to handle this, quite honestly, is to simply format the cells as Text before you start entering information. In that way, Excel will simply accept what is entered—including any trailing zeroes—and stuff it into the cell. You can, further, right-align the contents of the cells so that they at least look a bit more like numeric values.

The drawback to this is that you've got to be careful in using the values in formulas. The safest way is to simply surround any reference to the cell within the VALUE function, in this manner:

Another approach is to create a macro that checks what is entered into a range of cells. Start by formatting the cells as Text, and then create a named range (DataEntry) from those cells. You can then add the following code to the code sheet for the worksheet you are using:

The macro is triggered everytime something changes in the worksheet. It then checks to see if that change occurred in one of the cells in the DataEntry range. If so, then it examines what is entered in the cell (which Excel treats as text, since that's how the cell was formatted) and determines if it is a number and further how many digits there are to the right of the decimal place. It then formats the cell to have that many decimal places showing and stuffs the numeric value back into the cell.

The only condition where this approach won't work is if you place a value into a cell in the DataEntry range (which converts the cell to a numeric format) and then you enter a different numeric value in the same cell. The macro has no way of knowing, in that instance, if there are any trailing zeroes being entered. (Remember that trailing zeroes are only retained if the cell is formatted as Text. Since the cell is not, Excel lops off the trailing zeros and the macro works with that value as if it had been entered.)

Excel allows you to define styles that help you display data in a consistent manner. When you no longer need a particular ...

Jumping to a Table Row

Need to jump to a particular row in a table? Word provides an easy way to jump to all sorts of things, but it doesn't ...

Government and industrial organizations often use a numbering system that relies upon a number both before and after a ...

Formatting for Hundredths of Seconds

When you display a time in a cell, Excel normally displays just the hours, minutes, and seconds. If you want to display ...

If you need to determine the font applied to a particular cell, you’ll need to use a macro. This tip presents several ...

Merging cells is a common task when creating worksheets. Merged cells can play havoc with the normal functioning of some ...

GANESH
On further testing I realised that the UDF was rubbish and started again; this is wahat you get when working at bedtime. The following is correct.

Here is a UDF for the rounding.

You can enter it as =DYNAMICROUND(B2) if the value is in B2
or you can enter a formula instead of a reference
=DynamicRound(9/7) -->(returns 1.3)

GANESH KHATRI
Are the results below what you want? If so do you want them to change automatically like Allen's sub or do you want for format the values using the selection? 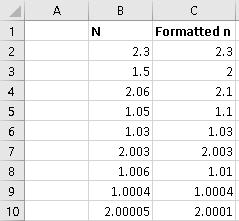 Let me know if we can do something about it.

It is but you will lose the formatting with calculations. 10.45000 + 2 will result in 12.45 as only the significant figures are calculated.

To retain the format will need a text calc function, like this?

A simpler solution would be to enter the value as text (as described above) and then have a second non-entry field that calculates (converts) the entered field as a number value. then use the number value field for any calculations.