Please Note: This article is written for users of the following Microsoft Excel versions: 2007, 2010, 2013, 2016, 2019, and Excel in Office 365. If you are using an earlier version (Excel 2003 or earlier), this tip may not work for you. For a version of this tip written specifically for earlier versions of Excel, click here: Hiding Columns Based on a Cell Value.

Hiding Columns Based on a Cell Value

Excel's great conditional formatting capabilities allow you to change the formatting of cells based on the content of a cell. There is no way, unfortunately, to easily hide entire columns of data based on the value of a particular cell.

You can, however, achieve the desired effect by using a macro to analyze the cell and adjust the Hidden attribute of the row you want to conditionally hide. The following simple macro, for instance, examines the contents of cell B4 and, if the cell contains 0, hides column H. If cell B4 does not contain 0, then column H is displayed.

If you want the hiding and unhiding of the column to be done in real time, you can use the following version of the macro. Just make sure that you put this version in the code window for the worksheet on which you want it to work.

Notice that the guts of the two macros are the same. The only difference is that the second version is triggered by an event within Excel—the changing of which cell is currently selected. This means that every time you move from one cell to another, the value in B4 is checked and column H is either hidden or unhidden.

This version of the macro actually checks three conditions: that B4 is not empty, that it contains a numeric value, and that the value is 0. If all three of these conditions are met, then column H is hidden.

Determining the Number of Bookmarks Defined in a Document

If you develop a macro that needs to work with bookmarks defined in a document, it is inevitable that you will need a way ...

Opening a Word Document when Starting the Computer

Some people use their computers for little else, other than to work on Word documents. If that is the case with you, then ...

If you open a workbook and find that the width of some of your columns has been changed, the discovery can be ...

Are you a keyboard-only user wondering how you can set column width or row height without using the mouse? This tip ...

One way you can widen the columns in a worksheet to fit whatever is in the column is by double-clicking the right edge of ...

I would assign this to a short cut and keep the ToggleHide to unhide later.

Ela, a variation on macro2 is to create a range name for the formula. Create by Ctrl + F3, New, Then fill in as shown in figure:
(see Figure 1 below)
The New macro refers to the range name, I called mine Mycount
Sub ToggleHide3()
Dim r As Range
Set r = Range("C2:CW3")
If [mycount] = 0 Then
r.Columns.Hidden = True
Else
r.Columns.Hidden = False
End If
End Sub 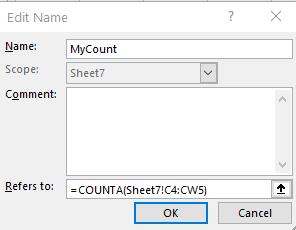 Tim
This is an Excel forum you should address your query there. However, hiding columns based on a condition requires a script in any speadsheet, not conditional formatting. Google sheets uses Java script for macros. Try recording a macro in Gool sheets (Tools, Macro, Record Macro) then you too can use a slesdgehammer to crack a walnut.

Ela
You may have already sorted this but I missed it first time.

If you are running the macro from a dropdown maybe this

Try and avoid loops if you can 😉

Ok. I was actually looking at how to do this with conditional formatting.

And I can't use this solution in sheets, becuase VBA is excel only.

You also lose points for a spammy popup with a tiiiny close button.

Hi Peter,
I would really appreciate your help if you can suggest a modification for the following problem.
I need to hide any columns in range C:CW only if both cells in rows 2 and 3 are empty. the macro i assigned to a dropdown hides columns only based on row2 so that even if a cell in row 3 has a value but a cell in row 2 is empty, the column will be hidden. (see Figure 1 below)
I don't know how to loop properly and I've tried to modified macros in this thread but i couldn't get any of those work.
Thank you!

Dim B As range

Megan
The easiest way is to count the yes in the speadsheet. I put the formula in G1 the code is very short and goes in a normal module.

You can format the value in g1 with white font so that is does not display.
(see Figure 1 below)

Allen, how does the code change if this is my goal: Hide an entire column if there are no values in a range of cells or if any of those cells have "No"/"no"/"NO"/"N"/"n" - column only appears if any of the cells in a range have text variations indicating "Yes"

i want to hide DA column which contains 0.00 for all employees.. How do i do that using macros???
Please help me

I have a sheet where cell E7 has a drop down with options Yes and No.

I've tried various options, including (the most successful- but for some reason it hides it on yes, and leaves it present on no) and the above, which doesn't do anything at all.

Please can you help? This is completely new to me! Thanks :)

I would like to add to the following code, the ability to evaluate columns E thru K ... it currently only works to hide column H. Can you help?

I want to have an automatic macro:

if total of either column of (E100:AD100) equals zero then that entire column should be hidden.

If one of the hidden column gets a value then that column should be automatically unhidden.

let me know if you need further clarification.

I want to hide an entire row IF a cell is TRUE and IF a specific cell in the soon-to-be-hidden-row is TRUE as well, otherwise it should show.

Really hope that you can help me!
Thank you!

I'd like to create the following functionality in excel:

Hi, how can I make it possible to hide column ranges based on selections in mulitple cells?

This will not work with this Macro set-up, I assume because more than one cell is referencing the same range of columns. Would really appreciate the help!

I'm hoping that someone can help me with my question.

I stumbled upon this tip looking for a means to hide/unhide successive columns based on whether or not there are contents in a previous column, and also for a range of rows, for the purpose of creating a hazard assessment.

For example, in a 3-step assessment, if there is one hazard identified in any of the steps (written in column A), they choose it from a drop down in column B. This would then need to unhide column C, to allow another hazard to be selected, if necessary. And there is room for 10 hazards total.

Ultimately, I'm trying to cut out unnecessary blank cells at the beginning of the assessment process.

Unfortunately, I have absolutely zero background with VBE and would be relying on total copy-paste help, if possible.

Thank you for your assistance. Willy, I read your second post first, and switched the order of the row and column, and it worked. I didn't try the first solution you offered, because the other one one worked.

The proper syntax of Cells() is:

I am trying to create a macro that will hide columns based on the value in row 4. True means hide the column and False means don't hide it. For some reason the code isn't working and I'm not sure why. The code I'm using is below.

@Willy Vanhaelen
your tip form 21.03.2015 has worked for me, however, if I wanted to hide the column based on more than one criteria how would I add this in. Using your previous scenario I would want to hide the column if the value of G2 is 1 or 5. I'm not sure how to show the 'or 5' bit. Thanks

Is it safe to assume that this same code will work for rows, substituting "row" or "rows" where appropriate?

@David Empsall
If the macro in my comment of 21 March doesn't work, you probably didn't apply my warning in the final note.

Being clear on expressing what you want is often the key to the solution.
What exactly do you mean by 'based on the value of a cell being between 1 and 10' ?
- Do you enter the numbers 1 to 10? What should happen for each number?
- Is it a formula that yields 1 to 10? In this case the technique of this tip is unreliable and should not be used .

@Willy Vanhaelen
I'm a novice, but I just cannot get the small trigger routine to work at all.
The routine in the main body above works but, as you rightly say, the worksheet is always refreshing itself whether or not the key cell is changed.

I would like to hide a lot of columns (not contiguous ones) based on the valye of a cell being between 1 and 10.

Although it's basically a nice tip, it appears to be badly worked out referring to the 28-02-2015 comments of 'Rod Grealish' and 'Helyosman'. But there is even more.

It's a bad choice to use the Worksheet_SelectionChange event in the second macro of this tip. The position of the cellpointer is not relevant but the value of cell B4 is. This can be monitored by the Worksheet_Change event. Then you can check if B4 has been changed and only then hide or unhide column H.

The following simplified macro will solve your problem:

Note that this macro should not be placed in a module but in the sheet's code page. Right click the sheet tab and select 'View Code'. That's the place to be :-).

My expectation was that when a user chooses a prompt on a cell on the worksheet, that the columns would hide/unhide based on the one cell. The real time macro does not appear to work, or I'm missing something. I copied it and made my adjustments. Please advise.
Private Sub Worksheet_SelectionChange(ByVal Target As Range)

what's more for the macro called "Sub HideColumn2()" you missed a parenthesis at the line 6.

Have a great day.

The If statement and the line before it can be replaced by a direct assignment to Columns("H").EntireColumn.Hidden viz.

The same applies to HideColumn1()