Please Note: This article is written for users of the following Microsoft Excel versions: 2007, 2010, 2013, 2016, 2019, and Excel in Microsoft 365. If you are using an earlier version (Excel 2003 or earlier), this tip may not work for you. For a version of this tip written specifically for earlier versions of Excel, click here: Summing Absolute Values.

There is no intrinsic function you can use to create the desired sum, but you can create a formula to perform the task. One method is to use the SUMIF function, in the following manner:

Another approach is to use the SUMPRODUCT function. The following formula will produce the desired result:

The function is typically used to multiply different elements of arrays by each other, and then sum those products. Since only one array (A1:A10) is provided, there is no multiplication done, but a sum of the desired absolute values is returned.

You can also get the desired result by using an array formula, a convenient but seldom used feature of Excel. Assuming your values are in the range A1:A10, type this formula:

Don't press Enter; instead press Ctrl+Shift+Enter, which signifies this is an array formula. If the formula is entered correctly, you'll see braces around the formula in the Formula bar:

What the formula does is internally create the intermediate column (which is an array of values) which are the individual absolute values of A1:A10. It then sums this array and displays the result.

Finally, if you prefer you could create your own user-defined function (a macro) that will return the sum of the absolute values in a range. The following is a macro that will accomplish this task:

You can use the function by entering a simple formula in your worksheet:

The Find and Replace capabilities of Word are very powerful, but they still come up a bit short when searching for some ...

Want to get a little bit of sound with your data? Excel can provide audible feedback that you may find helpful. Here's how.

Determining a State from an Area Code

Want to be able to take information that is in one cell and match it to data that is contained in a table within a ...

Averaging Based on Multiple Criteria

When you need to determine an average based on a very small selection of cells from a large dataset, based on multiple ...

Extracting Street Numbers from an Address

Want to know how to move pieces of information contained in one cell into individual cells? This option exists if using ...

Rannie
The most obvious way that a Value error is returned is if a number in the data is text. So I would examine the numbers carefully. The Following may help. If a number has been added with a leading apostrophe, then this number is treated as text. However, array formulas entered Ctrl + Alt + Enter and SUMPRODUCT functions will ignore this error. If a number has a space within it say 10 is entered 1 Space 0 then this produces a value error.

Use the Count Function if it does not give the correct number then a value(s) must be Text. 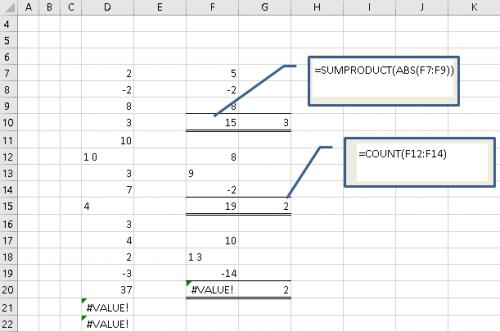 I don't have time to read frequent emails.

I'm a real estate appraiser and do have the need for Excel help. I will be very glad to give you credit in any report I do for the contributions you have made.

I need the absolute sum of a column of numbers. I tried two of your suggestions multiple times each and could not get them to work.

what did I do wrong?

The macro in this tip has a serious bug!

If the range contains a string (even a cell containing just a space) the UDF (User Defined Function) will produce a faulty result.
- An error will occur when the For Next loop encounters a cell containing a srtring.
- The "On Error GoTo Done" line causes the looping to stop and the line after 'Done:' will be executed.
- The result at that moment will be displayed skipping the rest of the range which is of course totally wrong.

So deleting the On Error line will fix this bug but here is a one-liner that does the same job correctly:

it shows #VALUE! in case your range contains a string just as the formulas do.
In fact it is simply the VBA implementation of the array formula {=SUM(ABS(Range))}