Please Note: This article is written for users of the following Microsoft Excel versions: 2007, 2010, 2013, 2016, 2019, and Excel in Microsoft 365. If you are using an earlier version (Excel 2003 or earlier), this tip may not work for you. For a version of this tip written specifically for earlier versions of Excel, click here: Placing Formula Results in a Comment.

Bob asked if it is possible to write a formula and get the answer in a comment, instead of in a cell. The short answer is that no, you can't do it with a formula. You can, however, do it with a macro. For instance, the following macro adds the contents of two cells (A1 and B1) and then sticks the result in a comment attached to cell C1:

If you'd rather run the macro on a range of cells, then a different approach is necessary. The following macro loops thru all the cells in a selection. If the cell contains a formula, the macro puts the value (the formula's result) in a comment attached to that cell.

While looping through the cells in the selection, if one of the cells has a formula and an existing comment, then the comment is deleted and replaced with the new comment that contains the formula result. Afterwards the cell's value will display as well as a comment with the same number. Instead of CStr you could also use the Format function to display the value in any way you might want.

You can also create a macro that will modify a comment whenever you update the contents of a particular cell. For instance, let's say that every time someone made a change in cell C11, you wanted the result of whatever is in that cell to be placed into a comment attached to cell F15. The following macro does just that:

When someone enters a formula (or a value) into cell C11, the results of that formula (or the value itself) is placed into a comment that is attached to cell F15. Since this is an event-triggered macro, it needs to be entered in the code window for the worksheet on which it will function.

Finally, you may want to have your macro monitor an entire column. The following macro uses the Change event of a worksheet, just like the previous macro. It, however, only kicks into action if the change was made in column F, and only if a single cell in that column was changed.

If the user makes a change to a single cell in column F, the macro grabs the result of what was entered and places it in a comment attached to that cell. The contents of the cell are then deleted.

Want to easily improve the security of your old data? Here's an addition to the venerable format command that can help.

Excel's conditional formatting feature allows you to create formats that are based on a wide variety of criteria. If you ...

Information formatted for one type of label may someday need to be printed on a different type of label. Here are some ...

Comments can be very helpful in a worksheet. After they are added, you may want to change what they contain. Here's how ...

Adding comments to the cells in your worksheets can help to document different aspects of that worksheet. Adding a ...

Allen,
Love this idea. Could you help me tweak it?

The range of cells to have comments added is "E8:AI8"

If cell in row 4 iserror, delete the comment in row 8 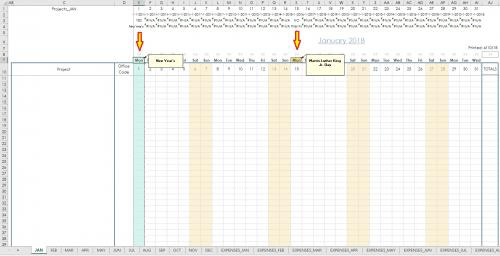