Please Note: This article is written for users of the following Microsoft Excel versions: 2007, 2010, 2013, 2016, 2019, and Excel in Office 365. If you are using an earlier version (Excel 2003 or earlier), this tip may not work for you. For a version of this tip written specifically for earlier versions of Excel, click here: Importing Custom Lists.

How you create a custom list from scratch has been covered in other issues of ExcelTips. Rather than creating a list from scratch, however, you might find it easier to import a list from a series of cells already in your worksheet. Follow these steps: 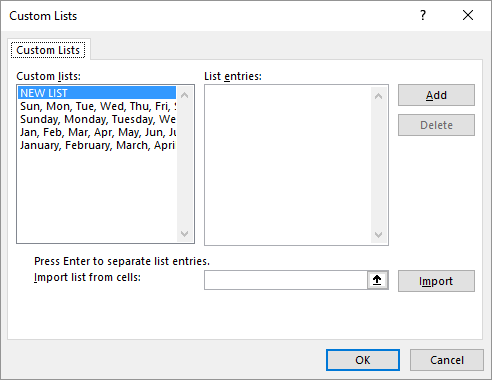 Named ranges are a great tool to use in developing formula-heavy workbooks. You may want, at some point, to copy your ...

Chapter Numbers in Indexes and TOAs

Word allows you to define prefixes for page numbers. These are often used for chapter or section numbers in a large ...

Symbols Convert to Numbers in Excel

Insert a symbol into a cell, and it should stay there, right? What if the symbol changes to another character, such as a ...

Need to do the same sorting operation over and over again? Excel doesn't provide a way to save your sorting criteria, but ...

Sorting by dates is easy, and you end up with a list that is in chronological order. However, things become a bit more ...

Automatically Sorting as You Enter Information

When entering information into a worksheet, you may want it to always be in a correctly sorted order. Excel allows you to ...