Please Note: This article is written for users of the following Microsoft Excel versions: 2007, 2010, 2013, 2016, 2019, and Excel in Office 365. If you are using an earlier version (Excel 2003 or earlier), this tip may not work for you. For a version of this tip written specifically for earlier versions of Excel, click here: Filling a Cell. 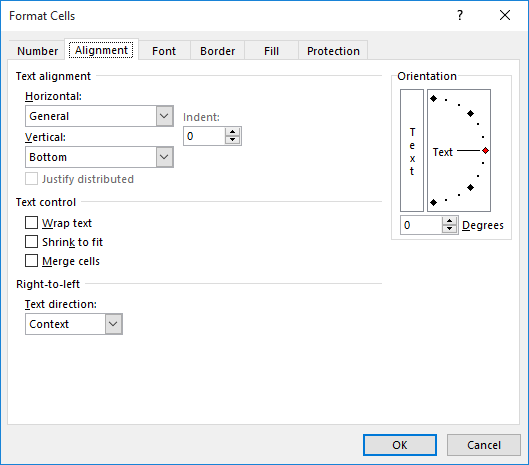 Figure 1. The Alignment tab of the Format Cells dialog box.

Excel repeats whatever you typed in the cell, until the entire cell is filled. For instance, if you typed two characters, then those two characters are repeated over the width of the cell.

It might be helpful to provide a bit of history here. This "filling a cell" capability has its roots in the very early days of Excel. In those early days when most things were text-based, this type of capability was used to fill a cell with a dash (-) or an equal sign(=). In that way, the cell could act as a "border" between groups of numbers or between headings and the numbers under those headings.

With the advent of actual formatting, which has now been available in Excel for years and years (and years), the usefulness of filling a cell in this way is obviously lessened.

I think it still has some usability, however, if you want to fill a cell with a "directive" to the user as to what should be entered in the cell. That is the reason I provided, at the beginning of this tip, an example that filles the cell with the text " Enter MPG " (with the spaces). This could be a directive to the user to enter a "miles per gallon" figure. That way, no matter how wide the user made the column, it would always be filled with that text.

Permanently Getting Rid of 'My Pictures' and 'My Music'

Getting rid of unwanted folders in Windows.

When inserting footnotes and endnotes in a document, most of us don't give much thought to the format used in the ...

Need to produce a quick double-spaced printout of your document? You can do it by using the simple steps in this tip.

Excel allows you to perform math using times as operands. If you subtract a later time from an earlier time, you should ...

Converting From Numbers to Text

If you have a range of numeric values in your worksheet, you may want to change them from numbers to text values. Here's ...

Creating a Center Across Selection Button

The ability to center text across a range of cells has long been a staple of experienced Excel users. Here's how to ...

One major snag with this, using it as a prompt for what should be entered. The value entered is also repeated across the cell.

The simplest of things makes me more productive. Thank you for this!