Please Note: This article is written for users of the following Microsoft Excel versions: 2007, 2010, 2013, 2016, 2019, and Excel in Microsoft 365. If you are using an earlier version (Excel 2003 or earlier), this tip may not work for you. For a version of this tip written specifically for earlier versions of Excel, click here: Using a Numeric Portion of a Cell in a Formula.

Using a Numeric Portion of a Cell in a Formula

Rita described a problem where she is provided information, in an Excel worksheet, that combines both numbers and alphabetic characters in a cell. In particular, a cell may contain "3.5 V", which means that 3.5 hours of vacation time was taken. (The character at the end of the cell could change, depending on the type of hours the entry represented.) Rita wondered if it was possible to still use the data in a formula in some way.

Yes, it is possible, and there are several ways to approach the issue. The easiest way (and cleanest) would be to simply move the alphabetic characters to their own column. Assuming that the entries will always consist of a number, followed by a space, followed by the characters, you can do the "splitting" this way: 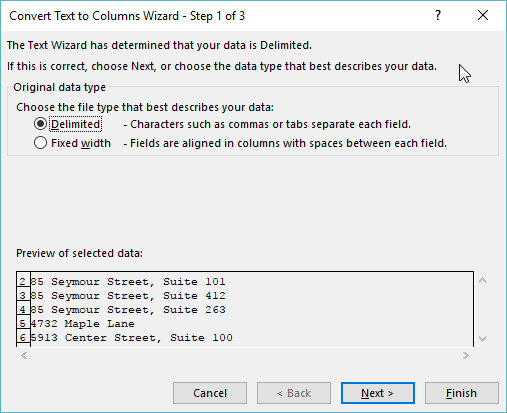 Figure 1. The first step of the Convert Text to Columns Wizard.

Word splits the entries into two columns, with the numbers in the leftmost column and the alphabetic characters in the right. You can then use any regular math functions on the numeric values that you desire.

If it is not feasible to separate the data into columns (perhaps your company doesn't allow such a division, or it may cause problems with those later using the worksheet), then you can approach the problem in a couple of other ways.

First, you could use the following formula on individual cells:

The LEFT function is used to strip off the two rightmost characters (the space and the letter) of whatever is in cell A3, and then the VALUE function converts the result to a number. You can then use this result as you would any other numeric value.

If you want to simply sum the column containing your entries, you could use an array formula. Enter the following in a cell:

Make sure you actually enter the formula by pressing Shift+Ctrl+Enter. Because this is an array formula, the LEFT and VALUE functions are applied to each cell in the range A3:A21 individually, and then summed using the SUM function.

When creating headers and footers in an Excel worksheet, you can use special codes to add or format information. This tip ...

Calculating the Day of the Year

Need to know what day of the year a certain date is? You can figure it out easily using the formulas in this tip.

Clearing Everything Except Formulas

Need to get rid of everything in a worksheet except for your formulas? You can do it rather easily by applying the ideas ...

Returning a Weight and a Date

If you have two columns containing dates and weights from those dates, you may want to pick a date associated with a ...

When processing huge amounts of data, it can be a challenge to figure out how to derive the aggregate values you need. ...

Determining Combinations to Make a Total

If you have a range of cells that contain values, you may wonder which combinations of those cells should be used to meet ...

@Lance
If your scenario includes the condition that both cells contain a constant value (not a formula), then you can use the following method.

Adjust ThisCell, ThatCell, and ThatSheet if necessary, but the cell address values must be absolute (like $A$1, not A1).

Hello,
I love reading the weekly Excel Tips and have a question that I think is not possible but would like to pose this question to the experts. Is there a way to link a cell, say A1, in a worksheet, say Sheet1, with a cell, say C1, in a different worksheet, say Sheet2, in the same workbook so that no matter which cell you change the value in, the other will also change?
Thank you for your time