Please Note: This article is written for users of the following Microsoft Excel versions: 2007, 2010, 2013, and 2016. If you are using an earlier version (Excel 2003 or earlier), this tip may not work for you. For a version of this tip written specifically for earlier versions of Excel, click here: Inserting a Watermark Behind Merged Cells.

Tony asked if it was possible to insert a "watermark" type of permanent comment into a group of merged cells. The idea is for the comment to stay behind any entered text.

The short answer is that there is no way of doing this. Excel allows you to use a graphic as a background, but only for the worksheet as a whole, not for a range of cells. Even then, the background won't print—which is why Excel calls it a "background" and not a "watermark." (True watermarks are on physical paper, not on-screen.)

One possible solution—if you want your "comment" to be text instead of a graphic—is to use a text box. Create a text box that is the same size as your merged cells, and position it over those cells. Then, add your comment to the text box, as desired. Format the text box so the font is a light gray, the text box has no border, and the background is transparent.

Now, if people use the Tab key to move into the merged cells, they can type things and it will appear in the cells. You may have to play with colors and appearance, because the gray text in the text box doesn't go away when you enter text in the underlying cells.

ExcelTips is your source for cost-effective Microsoft Excel training. This tip (11986) applies to Microsoft Excel 2007, 2010, 2013, and 2016. You can find a version of this tip for the older menu interface of Excel here: Inserting a Watermark Behind Merged Cells.

Columns can be an integral part of your document layout. In some instances you may want Word to insert a vertical line ...

Speeding Up Opening and Saving a Workbook

Use a workbook for some time and you may find that it gets progressively slower to open and save. Here are some ...

Pasting a Graphic to Multiple Worksheets

Do you need to add a logo or other graphic to a bunch of worksheets? Here are a couple of short macros that can make ...

Graphics are a great addition to a worksheet, but there may be times when you don't want them printed. The easy way to ...

Need to change a shape you previously added to your worksheet? It's easy to do using the graphics tools provided by ...

There is a way to add a true watermark (which may be a text or graphic) using a custom header or footer in Page Setup. It only shows on the print, so this does not solve Tony's problem that the watermark is visible while viewing the spreadsheet in normal view. Still, to do this, the graphic should be prepared beforehand by sizing it so that it fits on the page size selected. For the washout, I used Word to create the washed out watermark at full size, then took a screen capture of the watermark, saving it as a JPG file. Then, it is trial and error to size the image. Add the graphic to the center panel in the custom header or footer. The end result is that text in your spreadsheet prints on top of the graphic. Viola! (see Figure 1 below) 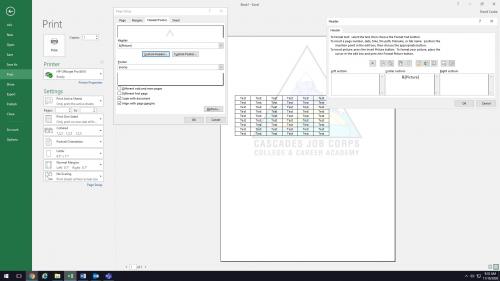 Why not simply use a data validation input message (with any value)?